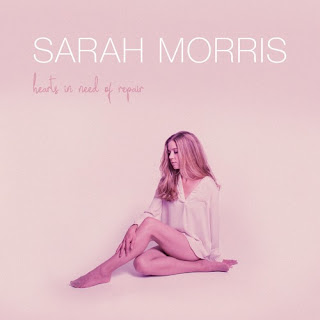 Hearts in Need of Repair is the third album from Minneapolis singer/songwriter Sarah Morris and is a more than worthy follow up to 2013’s Ordinary Things. She brings a variety of instrumental voices to bear on the album’s eleven songs courtesy of many musicians who’ve contributed to earlier efforts and this consistency of sound from one release to the next gives her discography an unity few of her contemporaries can boast. Despite the instrumental diversity, Hearts in Need of Repair clearly embraces classic elements of both country and folk music while never sounding like the equivalent of a butterfly trapped under glass. These songs, instead, are gloriously alive and practically ache with sensitivity. Hearts in Need of Repair will likely enjoy the same level of success as Morris’ earlier efforts, but it goes more than a step beyond in terms of quality and will certainly elevate her already high standing.

If she released nothing but the title song from this album, it would likely make the same impression. It’s that good and perfectly understandable why she chose to lead off the album with the song. There’s a handful of interesting musical decisions powering the song, especially how the tempo changes from the verses into the chorus, that helps give it added spin it might otherwise miss. “Good at Goodbye” is another high point on the album and reaches those lofty heights without ever apparently exerting itself much. The lyric is among the best on Hearts in Need of Repair thanks to two key strengths – the wealth of detail in the song makes it a more intense listening experience and the direct chorus makes an impact as well. The bluesy elegance of “Falling Over” is substantive window dressing for a song that delves deep into personal experience but makes it resonate for all listeners and the addition of slide guitar makes it all the more passionate. “Course Correction” cops some of the musical feel from the opening cut and mixes it up with an exceptional conversational lyric that sparkles with genuine poetic value. The breezy, emotive vocal Morris provides the song deftly handles the changing tempos.

“Empty Seat” is one of the album’s truly breathtaking moments as all the finest elements from the other ten songs find their greatest refinement and a near flawless expression both musically and lyrically. This will be an undoubted peak for many listeners and it’s difficult to imagine anyone with an appreciation for fine songwriting stepping away from a performance of this track anything less than completely impressed. She shows a real flair for taking the common feelings of love songs and giving them profound intimacy redeeming any of their formulaic elements. “Nothing Compares” is the best example of this on Hearts in Need of Repair and the palpable meaning she invests the lyric with will impress even the most jaded music fans. “On a Stone” has some of the same spartan beauty we hear with the aforementioned musical track, but there’s less conversational poetry driving the lyrics in favor of strong imagery. Sarah Morris’ third album is more than just her best yet – it’s a paradigm shift for the artist that promises everything from this point on will follow the same glittering upward trajectory.
Posted by Blog Admin at 9:34 AM