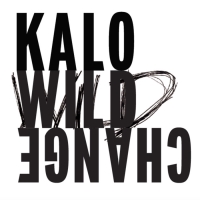 Bat-Or Kalo has attracted a lot of much deserved attention for her scintillating guitar work and dramatic, heavily emotive vocals, but her three piece KALO is a band that brings the goods across the board. The interplay between Kalo’s six string, vocals, and the rhythm section of bassist Mack McKinney and drummer Mike Alexander pops the band’s latest release Wild Change from the beginning and retains its capacity to entertain over different styles. This band has garnered plum concert and festival spots and numerous laurels since their formation and this release, their fourth overall, seems to be geared in such a way that it will expand their growing profile on the scene. It is unlikely KALO wants to be confined to the roots music genre and everything about this offering suggests that they shouldn’t be. They may be influenced by traditional blues, funk, and R&B, but they present a thoroughly modern product for listeners.

The blues dominates much of the album. It’s gritty, amps dialed to ten, electrified blues with immediate presence and Kalo’s vocals are forceful each time out. “One Mississippi”, “Isabel”, “Fix”, the title song, and the second to last cut “Bad Girl” embody the various approaches that KALO uses to tackle this venerable form. “Isabel”, the title cut, and “Bad Girl” rely on a brawling, intense instrumental attack that overwhelms listeners every bit as much as they bewitch them with skill. “One Mississippi”, the album’s opener, and “Fix” are a little more sedate in comparison and focus on a more commercial side of their approach without ever lapsing into cheap vulgarity. The band goes in for some stabs at R&B and even funk on songs like “Upside Down” and “Pay to Play”. The first one incorporates brass into the musical arrangement with great success – Kalo seems to delight in playing her voice off against these added instruments. The second track, “Pay to Play”, is a delicious groove-oriented attempt to craft a hard funk tune and succeeds quite nicely. Kalo’s guitar isn’t far from the spotlight on either song, particularly the second, and it concludes “Pay to Play” on an impactful note.

The band has other surprises in store for listeners. They come late on Wild Change, but the acoustic “Smile and Blush” and the album’s final curtain “Calling All Dreamers” help bring the album to a wafting, gentle conclusion even with the blasting “Bad Girl” sandwiched in between both songs. “Smile and Blush” is a little more musically involved than the last song, but the spartan beauty of “Calling All Dreamers” is quite appropriate given the subject matter. It also shows off another way that the trio approaches vocals – the vocal arrangements on each tune help highlight the band’s possibly underrated lyrical content and the sheer solidity behind their songwriting. Wild Change provides ample evidence that this three piece is growing in talent and power with each new release. KALO packs quite a wallop, as it is, and they play like musicians who refuse to be denied.
Posted by Blog Admin at 11:07 AM