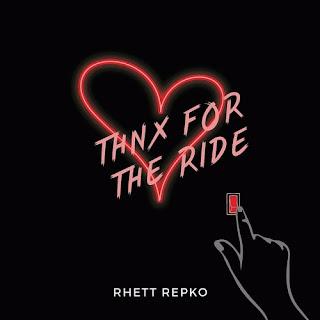 Rhett Repko’s latest release, an EP entitled Thnx for the Ride, opens with the title song and announces the collection’s arrival in a big way. The recording of the opener has a visceral quality capable of grabbing a listener’s attention and holding it while mixing up styles in a satisfying way. Despite the obvious rock slant of the EP, many of the seven songs feature a strong underpinning of acoustic guitar and ride fiery performances from each band member. “Thnx For The Ride” moves from an energetic stomp into ska-like passages with confidence and the shifts are never jarring.

The EP’s second song, “Please Don’t Laugh”, is a more straight-forward number establishing an early groove, but the band and Repko never sound anything less than energetic and there’s palpable commitment behind each line. The vocals for Thnx For The Ride make good use of harmony vocals without ever overdoing it, but what really stands out by the third song is the emotional tenor of his voice. None of these tracks aim to remake the wheel, but Repko’s singing lives out each one of them for the listener and it makes an impact. “It Ain’t Coming From You” is a great example of his voice’s transformative powers. It’s another great rock track married to a Repko lyric and vocal tinged with just the right balance of bitterness and heartache.

“Maybe I’m Weak” has jolting vulnerability, but there are undercurrents in Repko’s writing for discerning listeners to uncover and his vocal does a nice job, once again, getting under the skin of the song and dramatizing it for his audience in a gripping way. Repko and his band demonstrate, once again, their talent for turning on a dime musically with the track “And I Told Her So”. The song whips through some nifty tempo changes, never breaking a sweat, and lead guitarist Stefan Heuer even unleashes some torrid wah wah licks near the track’s conclusion. This rock song has a sinewy vibe during much of it upping the intensity.

The second to last track “Learn Your Name” has some strong riffing counterpointed by vocal harmonies softening the song’s otherwise lightly abrasive touch. Much of the punch in this song, thanks to its structure, comes from the rhythm section. Drummer Tom Bryant and bassist Dan Gallagher make quite a tandem throughout the entire EP, but this is one of their peak moments.
The EP concludes with “Make Me Right. It’s, arguably, Repko’s most impassioned vocal performance on the EP, befitting its status as closer, and the lyrics contain the same penchant for self-examination powering many of the earlier songs. It brings Thnx For The Ride to a charged ending few listeners will find unsatisfying. You’ll be challenged to not love this release, front to back, as Rhett Repko gets better with each new studio recording.
Posted by Blog Admin at 2:11 AM