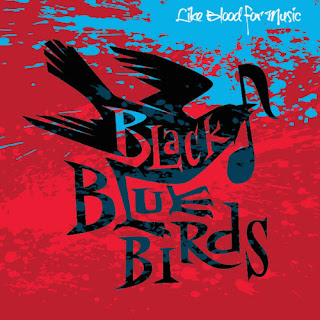 It’s difficult to pin one stylistic label for Minneapolis’ Black Bluebirds. Their album Like Blood for Music has a sharp fatalistic point of view on many of its songs, but chief songwriter Daniel Fiskum imbeds those adult messages in pleasing and recognizable structures sure to win a significant audience. The dominant mode for much of the album is hard rock, but Black Bluebirds never embrace the same tropes we hear from paint by numbers riff rock. Black Bluebirds, instead, employ a stylized vision of hard rock incorporating more acoustic textures than you might expect and a second de facto lead vocalist with singer Jessica Rasche. The juxtaposition of her voice with Fiskum’s intense near drone gives many of the songs a distinct flavor of their own.

“Love Kills Slowly” sets up everything that follows with a keen ear for drama and substance alike. Fiskum and Rasche’s voices weave together with a strong effect and it never sounds too overwrought or affected. The contributions from guitarist Simon Husbands is important, but never mars the arrangement with undue histrionics. The lean fierceness of “Strange Attractor” contrasts well with the opener and shows another side of the trio’s hard rock identity without veering too far from what we hear in the opener. Fiskum has a stronger vocal presence here than we hear in the song “Love Kills Slowly”, but Rasche’s singing hovers just below the surface of the mix and fills the song with her spirit. “Life in White” is the first significant shift in the album’s sound. The incorporation of acoustic guitar into their musical DNA comes off seamlessly and Foskum’s synthesizer lines support the guitar work quite nicely. The light jangle of the six string is slightly offset by the theatrical, declamatory tone of Fiskum’s voice.

There’s a light punk spirit driving “Battlehammer” on, but the sound is predominantly hard rock and the band builds quite a head of steam from the beginning. Drummer Chad Helmonds is responsible for a lot of this, but Husbands lays some colorful guitar over the top. “Soul of Wood” is, arguably, of the best hard rock moments on Black Bluebirds’ Like Blood for Music. There’s no doubt the band is a convincing hard rock outfit and their ability to manipulate their sound in surprising ways sets them apart from the pack. It seems improbable, but the band turns their hands towards a ballad of sorts with the track “Don’t Fall in Love” – the blending of such a deliberate tempo with lyrical piano and impassioned vocals from Fiskum and Rasche alike make this one of the album’s more memorable, albeit unlikely, moments.

The finale, “Legendary”, bears some superficial similarities to the aforementioned tune in terms of tempo, but the similarities end there. Black Bluebirds strip away a lot of the storm of sound we hear with earlier songs in favor of a much more economical, yet cinematic, approach. The song definitely wants to conjure a mood for listeners and invoke atmosphere far more than show off chops to no appreciable end. Black Bluebirds’ Like Blood for Music is a fantastic moment for the modern indie music scene and the three piece shows immense promise for the future. Daniel Fiskum and Jessica Rasche are an unique singing tandem and they’ve only begun to explore their potential together.
Posted by Blog Admin at 9:48 PM