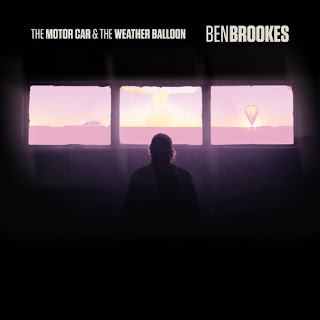 The Motor Car & The Weather Balloon will stand indefinitely as one of 2017’s best musical releases and even a single listen to the ten songs will bear out why. Ben Brookes doesn’t sound like a young singer/songwriter making some tentative but promising forays into the marketplace – his work on this full length album sets a high bar for his future releases that’s its scarcely imaginable he’ll clear anytime soon. The uniformly high quality of the performances here is breathtaking and there’s an overall coherence to the album, manifested in elements like its track listing, missing from a boatload of modern releases. This UK born icon in the making has all the hallmarks of a long career in front of him and The Motor Car & The Weather Balloon ushers it in with considerable fanfare.

Melody is one of the defining factors driving this release. Many of them are instantly memorable and catchy like the opener “ I Wanna Go Home” and, if they are reminiscent of acts like Badfinger and The Beatles, Brookes pushes back against those comparisons with the uniqueness of his lyrical point of view. His songwriting, likewise, expresses universal sentiments in a way that comes off as profoundly personal to Brookes. Any adult with a certain level of life experience will easily relate to this song. “Integration (Not Segregation)” is one of the album’s more impassioned moments and the mix of jagged guitar fills contrasted against Brookes’ voice make for an appealing mix. The intensity is turned back down to a lower simmer on the third song “Asleep in Galilee” and there’s a liberal mix of pop and rock influence woven throughout the track. Some of the songs on The Motor Car & The Weather Balloon come off with an electric folk character and it hits listeners in just a right way. The Biblical imagery spices up Brookes’ lyrics just enough without ever sounding forced.

“Before Sunlight” is one of the best moments on The Motor Car & The Weather Balloon. Much of its excellence comes from one of Brookes; best vocal melodies and it embeds itself in listener’s memories with precious little effort. Its winding qualities are quite charming without ever trying listener’s patience and the lyrical content locks up very nicely. Michael Bland’s drumming is especially strong on the song “Stories in the Rain” and the slashing electric guitar fills peppering the song match Brookes’ slowly climbing vocal in a particularly gripping way. It’s another of the more obviously emotional tunes on The Motor Car & The Weather Balloon. The second to last song on the album is “Somewhere Around Eight” and none of the aforementioned emotional performances readily match this outing as Brookes red-lines his voice without any obvious sense of strain. It seems, in retrospect, to be the album’s natural climax while the final song “Shackles” acts as a coda of sorts that brings The Motor Car & The Weather Balloon to an elegant and heart felt ending. Ben Brookes’ first full length release is an important release that deserves all the plaudits it’s sure to receive.