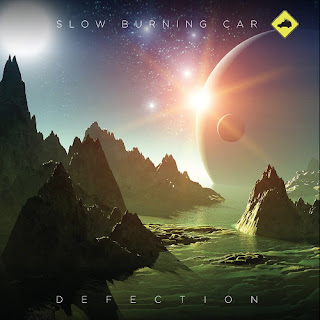 Los Angeles based Slow Burning Car has given audiences a number of different looks since they first formed. Their fourth album Defection finds them in particularly robust shape as they serve up a rather eclectic collection firmly in keeping with their identity as a stylistically varied band. Defection is the band’s fourth album and features ten songs arranged in such a way that the release flows with its own internal power running far deeper than mere surface textures. The band, operating as a four piece with this release, mixes heavy guitar riffing with acoustic textures and a smattering of electronica in a compelling fashion never risking self indulgence. The band’s professed influences never shine too brightly through their own songwriting and it shows Slow Burning Car are a band capable of transmuting sounds and tendencies they admire through their own personal vision to craft something, in the end, uniquely their own.

There’s not a more appropriate song on Defection for the opening slot than “Alpha Duplicor”. It doesn’t win over the audience with some breakneck tempo or flashy instrumental work, but bulldozes you into blissful submission while still entertaining you with a variety of unexpectedly musical moments. It’s clear from this song alone that Slow Burning Car are an unusual band and demand audiences deal with them on their own terms rather than the listener’s preconceived notions. “Soul Crimes” is one of the album’s undeniable high points. This pedal to the floor hard rock track shows off the band’s influences in that vein better than any other individual cut and the lyrics are a cut above the usual fare with their occasional startling turns of phrase. There’s a fair amount of the elements in this song that will prove familiar to listeners, but there’s enough of a signature style behind a song like this to bear out the assertion that Slow Burning Car have something of their own to say and the talent to do it.

They definitely have a hint of punk influences percolating in their music and we hear it quite clearly in “Devil in the Room”. It isn’t the careening, out of control get in and get out punk rock style, Slow Burning Car’s songwriting is far too considered to embrace that pose. “The Sunday Derby” is another highlight thanks to its ability for showing off the band’s arranging nuance within an idiom not particularly known for its understatement. Slow Burning Car do memorable things with tempo and the feel of a piece; “The Sunday Derby” shifts gears often while still never sounding too cluttered, yet it retains the expected musical intensity throughout. Listeners are reacquainted with the band’s punk side on the track “You Can’t Stay Here” and it’s a nifty new coat of musical paint for some time tested songwriting subject matter. The tracks “Bedtime” and “Chrysanthemum” are quite unlike anything else on Defection thanks to their vulnerable, near lyrical acoustic textures and the band, to their credit, sound equally at home with this fare despite the radically different sound. Slow Burning Car isn’t content with one approach and prove, with Defection, that their talent for successfully juggling styles is quite unlike any other band working today.
Posted by Blog Admin at 3:02 AM