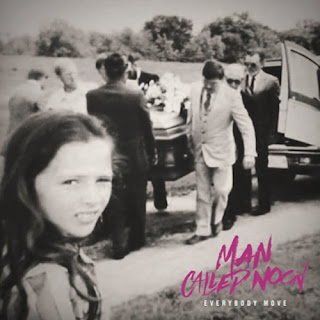 The punchy pop sprightliness underpinning even the rockiest moments of Man Called Noon’s Everybody Move incorporates other strands without ever coming off as too cluttered or overreaching. The three song EP is short, but covers an astonishing amount of musical ground within that short space of time and never fails to crackle with life. Everybody Move’s songs reach an impressive maturity level while remaining condensed musical efforts that never risk self indulgence. Man Called Noon achieves a specific sound for the release, as well, that has across the board consistency and a warm, organic quality despite the numerous effects applied to the instruments. This is a physical rock band with a modern aggressiveness in their attack that deserves widespread attention. They’ll likely get what they’re hoping for with the release of Everybody Move.

The title song is a masterful piece of musical construction that never bites off anymore than it can chew, stays centered on the guitar, yet marries that approach to an expansive and melodic sound quite unlike anything else on the release. Power pop rock wouldn’t be a misapplied description for what they do here, but there’s also a coarse lyricism accompanying some of James Marino’s lead guitar that’s straight out of an alt rock playbook. They harness impressive vocal energy with three distinct voices offering something to the band’s presentation, but lead singer Anthony Giamichael sets the tone with inspired, uplifting vocals never straining to catch the audience’s ear. “Kiss Kiss Bang Bang” has a certain amount of lasciviousness in the lyric, but never so much that the song comes off as puerile. Instead, it’s a physical and rollicking stab at something akin to pop funk,, with an emphasis on the latter style, while Marino’s guitar work throws some slashing rock licks in for added measure.

Man Called Noon ends Everybody Move with the track “One Last Ride”, closer to an out and out rock song than anything else on the EP while still retaining the band’s commercial elements in good stead. The melodic content is crisp and largely handled by James Marino’s guitar while Giamichael’s lyrics get an excellent all around vocal treatment to end the release on a biting high note. This Chicago based band has already made a name for themselves as an explosive and entertaining live unit, but there’s little question that the turn their development takes with this release likely represents their definitive sound and further refinement from here will only make them a more potent band for years to come. It’s an occasionally raucous, always intelligent EP release and positions Man Called Noon as one of the brightest rising talents in the indie band scene.