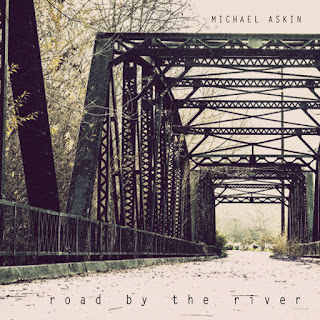 Following up the momentum established by his 2015 solo release Ignore the Evidence, singer/songwriter Michael Askin continues to push an impressive career forward with his third EP, Road by the River.  Though only 5 tracks long Askin makes the most of the EP’s relatively short runtime by employing extremely thoughtful songwriting, great playing featuring a very nice balance of varying instrumental textures and solid melodic vocals that lament on loss, heartbreak, etc.

The title track sets the tone as sweeping acoustic guitars thread together multiple melodies via a couple of guitar lines while the bass lines provide a somber push and the drumming vaults across lively snare patterns that keep the tune moving energetically forward.  Michael’s vocals shine brightly throughout and when the chorus strolls through there’s some nice double-tracked harmonies added to soothe the ears.  Overall, it’s a lush composition draped in organic folk and country shades that are an absolute beautiful joy to behold.  “Nashville” opens with a heartland acoustic country guitar line set against hickory cured, smokehouse melody vocals from Askin.  Gleaming steel guitar runs pretty up the musical backdrop and the song seasons the tuneful country/blues with some popping percussion, rocked out guitar riffs and driving bass lines during its second half that keeps the structure constantly evolving.

A sweeping unplugged lick intros “Sun Going Down,” a downturned blues-leaned cut that sounds tough and dirty even at its most melodic.  Electric lead squalls pile atop the chopping acoustics as Askin’s voice embraces a gruff attack element.  Heavy riffs and howling organs further the molten, 70s hardened blues textures and the end result is a composition that could appeal to fans of Leslie West and Alex Harvey.  A folky lead-in groove laid down on the acoustic sends “Hard to Make a Living” back down the aural dirt roads of Dylan and more recently Iron and Wine.  Minimalist drum work providing a simple beat, fuzzy background guitars and another dose of Americana organs give this serenity jam a real set of musical legs to run on as it heads off into a glowing orange sunset in the wild American West.  Closer “Last Train” also adopts these similar country n’ western folk influences by kicking off with a begotten acoustic guitar riff upon which Askin’s vocal melodies drift wayward in a ghostly, breathy melody that’s instantly infectious.  Again Michael’s use of the organ is some of the best by any modern artists and it enhances this track with a soft orchestral grandeur that wraps around the smoldering guitar lines and campfire lit vocals.  The organ work also gives way to some unusual 80s sounding synthesizers that take the tune in an entirely different direction altogether.

Fantastic work all around by Michael Askin on Road by the River; quite frankly the writing on this EP is so good that it eats like a satisfying full-length.  Each of the 5 cuts has its own merits and multiple nuances to reveal as you listen to the music more and more.  Anyone into alternating acoustic/electric folk, country, blues and rock sounds would do well to add this release to their collections.
Posted by Blog Admin at 11:45 AM