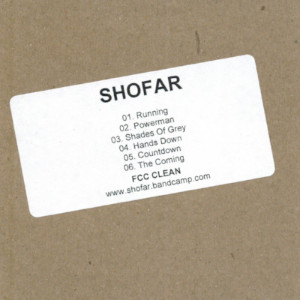 Shofar is as likeable as they come. Rarely does a band show such a talent for crunchy guitar rock balanced out with an equally attention-grabbing melodic bent. The native Minnesota quintet has a couple of releases already under their belt, but they’ve been inactive as a recording unit for some time now and their self-titled EP release represents the band’s first officially released recordings since 2005’s Turn. Larry Hagner is the band’s primary artistic force, serving as both songwriter and lead singer, but the six songs on this release make it abundantly clear this is a group effort in every important sense and Hagner’s collaborators help him realize his ambitions for the material without ever compromising or obscuring his voice. This EP is as fine as any release in 2017, indie or mainstream, and is certain to build momentum for a memorable 2018.

They waste no time grabbing listeners by the ear. “Running’ is a visceral, urgent tune with rambunctious guitar pyrotechnics and hard-hitting drumming. It’s one of the harder edged tunes on the self-titled EP, only lightening ever so slightly with a more measured approach during the verses,  Despite the weighty subject matter, the track’s built from a beguiling set of changes and much more melodic than the opening number. Guitar is still a prominent instrument in the mix, but there’s a distinctly different feel than listeners experience with the first song. The drummer is consistently strong throughout the EP and one of its high points surprisingly comes with the song “Shades of Grey” because, in essence, it acts as a sort of counterpoint to the lighter strains of its guitar attack and emphasis on melody. Larry Hagner’s vocal on the song “Hands Down” rates as my personal highlight for the EP’s singing performances. It’s the straightest rock tune, both musically and lyrically, on the release and has some charged transitions that linger in the memory, What a song.

There’s no real drop off with the next track. “Countdown” unflinchingly tackles the literal end of the world for its subject matter and sets it alongside a sensitive, piano-focused arrangement for memorable contrast. It’s the song with the lightest touch on Shofar’s new recording but shows their uncompromising spirit without resorting to power chord guitar heroics. Shofar’s personal beliefs artfully shine through on the EP’s conclusion “The Coming” and it’s both entertaining and illuminating. There’s a little of the hard hitting guitar attack we’ve heard on earlier tracks, but it has a more experimental and dream-like edge than anything else they’ve included on the EP. This release should bring Shofar back in a big way while also whetting the appetite for a future full length hopefully to soon follow. This is vital music full of conviction.
Posted by Blog Admin at 9:50 PM